The Wordpress site softwareengineeringdaily.com is the source of data used by the SE Daily API and associated clients. When new episodes of the podcast are published, a new post on the Wordpress CMS is created containing the episode description and the audio links.

Contributors will have to run the miner locally against a local MongoDB instance in order to have data for the API to serve. Alternatively, contributors can pull and run a pre-mined Docker image. Use the docker-compose.yml file found in the web front end and API projects for reference. 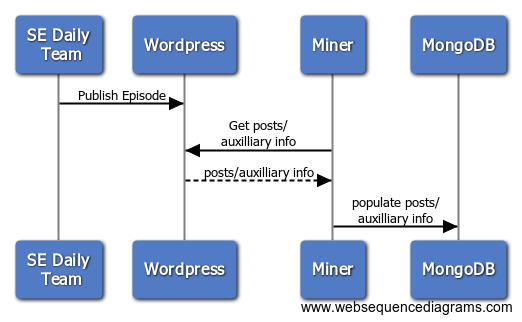 The Mongo database runs in production and staging as a Heroku add-on to the REST API application. Data is mined from the Wordpress site to MongoDB and transformed to suit the needs of the client applications. 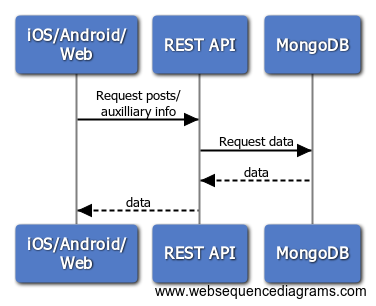 Used in conjunction with the REST API, these are the clients for the Software Daily platform. The Web frontend is hosted on Heroku.

The devops platform is an event processing infrastructure server allowing clients of Software Daily to send events such as episode plays, user registrations, and errors originating from the REST API. Data is streamed to an InfluxDB instance and then displayed using Grafana. The Node.js API responsible for ingesting events is hosted on Heroku while the InfluxDB and Grafana instances are hosted on an AWS EC2 instance.